If you’re following me on Twitter, you’ll have noticed that the amount I’m talking about the environment and climate change has ramped up recently. I want to explain why, and why this is probably the most important blog post I’ve ever written.

For GOTO Amsterdam, the organizers asked if I could talk about the 4th Industrial Revolution (I may write a blog post on that later). While I’m familiar with the concepts in the 4th (possibly actually the 6th) IR, I needed to know a little bit more about the history of Industrial Revolutions in general to make a good talk. So a few months ago, I started researching.

Iron and steam. Steel forges and railways and ocean-going ships. Electricity and telephones and computing and the technology age that we now currently enjoy. Movement and machinery and connectivity. The automation that started with the textile mills of the UK has spread world-wide.

It all needs power. Lots and lots of power. Those of us in the tech industry use a hell of a lot of it; in our work, our play, and our travel. Our computers and the internet require power. Those hot laptops and graphics cards are evidence of how much power we use. The aircon that keeps our offices cool. Our cars, our flights, the industry that makes our phones and tablets and all the other tech…

It all needs power.

So I started researching the effects of that power.

I hadn’t actually read the IPCC’s report before. There’s a summary of it for policymakers that’s a bit long.

Until this year, I figured the policymakers had probably read it. They had to be working on something that was appropriate for the urgency, right? But the Extinction Rebellion movement keeps growing… is it just people panicking over nothing, or is that sense of urgency really justified? Does Greta Thunberg, the 16-year-old who’s spoken most passionately about her own future, really mean it when she talks about the collapse of civilization as we know it?

Well, the IPCC’s got some nice pictures to make it easy for us. Here’s two of them. They’re on page 11 of that summary I’ve already linked. 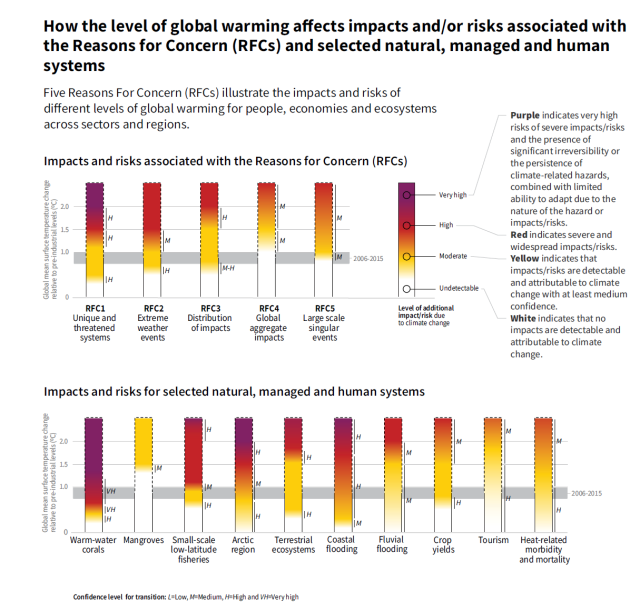 So this is why they’re asking us to stay below 1.5C.

I thought 1.5C might be, you know, kind of OK. But it turns out even at 1.5C we’re destabilizing the arctic (bye-bye, polar bears), probably the Western Antarctic ice sheet, losing most of the warm-water corals with their rich ecosystem, turning some places into famine-stricken deserts, and flooding others. You know, more than they already are. You can see the grey bar representing 2006-2015 on that chart.

At 2.0C, as well as the effects being horribly red-looking across the board, we’re entering that place where the feedback cycles start kicking in. You know, more than they already are. Here’s a picture from ClimateVictory.org that shows the basics of what that looks like.

So we’d really, really like to stay below 1.5C if we can, because 2.0C is not looking good. 2.0C is looking, well, pretty devastating.

So how are we doing?

Here’s the Independent’s report, based on a number of existing models. I’m just going to quote it, because there’s a key phrase in there, and the fact that it exists is ridiculous.

Based on lack of meaningful global action to rapidly extinguish all greenhouse gas emissions within the next decade, the authors sketch out a scenario in which global emissions peak in 2030.

In this case, using several existing studies, they hypothesise average global temperatures may reach 3C above pre-industrial levels by 2050.

Scroll back up. Can you see 3C on those charts?

I think that’s the point where scientists just throw their hands up and beg everyone to grow the f&*$ up. Actually, that’s Bill Nye doing that, right there. And you can hear everyone laughing, because Bill Nye swearing is incongruous with his normally family-friendly presentation and incongruity makes us laugh, but it isn’t funny. It isn’t funny at all.

And we’re looking at 5C by the end of the century, at least. 5C’s unimaginable. At 5C and above, things start to get apocalyptic. If it isn’t an existential threat for humans entirely then it will certainly, as Greta Thunberg says, be the end of civilization as we know it. António Guterres, the Secretary-General of the UN, said this week that “We are in a battle for our lives.”

We’ve already started to see it. It looks like Chennai, India’s 6th biggest city, running out of water. It looks like police using tear-gas on peaceful protesters, in a country where the temperature hit 45C this week. It looks like animals going extinct, at a rate that’s faster than anything since the meteor impact wiped out the dinosaurs. It looks like insects disappearing and the failure of ecosystems world-wide that results.

It looks like that, only more, and worse, everywhere. Oh, and the sea-level rise will cause storm-surges (which will be more frequent) to flood most coastal cities, and probably London too.

So what do we do?

Most of us who are environmentally-minded are used to thinking, “How can we live our life the way we want, and still be kind to the world?”

We need to change this round. “How can we be kind to the world, and still live our life the way we want?”

That means doing whatever you can, even if it makes you uncomfortable. Take the train instead of flying. If you have to fly, carbon-offset your flights. Carbon-offset everything. This site by fellow coach Henrik Kniberg and friends, GoClimateNeutral.org, makes it easy.

A zero-carbon world doesn’t have to be an awful one. The more we invest in it, the more the infrastructure around it changes to support it, and the easier and cheaper it gets… and the more normal it gets, until hopefully the outliers are shamed into joining the rest of us.

Plant a tree. Change providers. Use green electricity. Get an electric car. Or better yet, a bicycle. Switch to the Ecosia search tool. Don’t like my suggestions? Great! Make better ones.

Do not go gently into that good night. It won’t be good, and it won’t be gentle, and by the time that starts to make itself felt in your life, it will probably be too late. Shout about it. Those of us in technology are more connected than anyone else. Shout about the products making a difference. Shout about the awesome people doing good things.

But most of all, shout about the urgency. Shout about how we need to do something now.

Let’s save what we can.

This entry was posted in life. Bookmark the permalink.

5 Responses to Off the Charts